How to Do ‘Couture’ Off the Runway

Ah couture…the most transformative form of clothing to exist!

A couturier uses needle as its pen, thread as its ink to weave together a story—a fairytale if you will— that wakes up that part of humanity that craves beauty and majesty in a world that can feel oftentimes mundane. The problem with fairytales is that most feel the need to wake up from them and deem them unachievable. In clothing, couture has a tendency to be one of those dreams. Couture collections by top fashion houses (we can thank the House of Worth for that!) are distinguished from ready-to-wear, in the essence that couture is not ready to wear on the cement catwalk that is street style. Couture is meant to be art—on the runway, in museums, and for those few lucky ones, custom made for the red carpet. But that does not mean Couture cannot be emulated in the everyday woman’s wardrobe. Many of my looks are inspired by snippets of couture, and I’m here today to show you how this can be achieved.

For this look in particular, I was inspired by Chanel’s Spring 2018 Haute Couture Collection, as well as the fashions of French royalty inspired me during the rococo period, which also sparked from the Fall 2007 Christian Dior Couture Collection—move over Marie Antoinette!

While the rococo period was excessive and gaudy to say the least, one does have to admire the period’s risk-taking attributes. Women wore their hair to bird nest heights and put plastic birds decals in them! Men and women alike wore loafer style shoes with heavy decorum, and deeply detailed dresses and jackets with sculptural tendencies, one that defied body shapes of human anatomy’s capabilities! 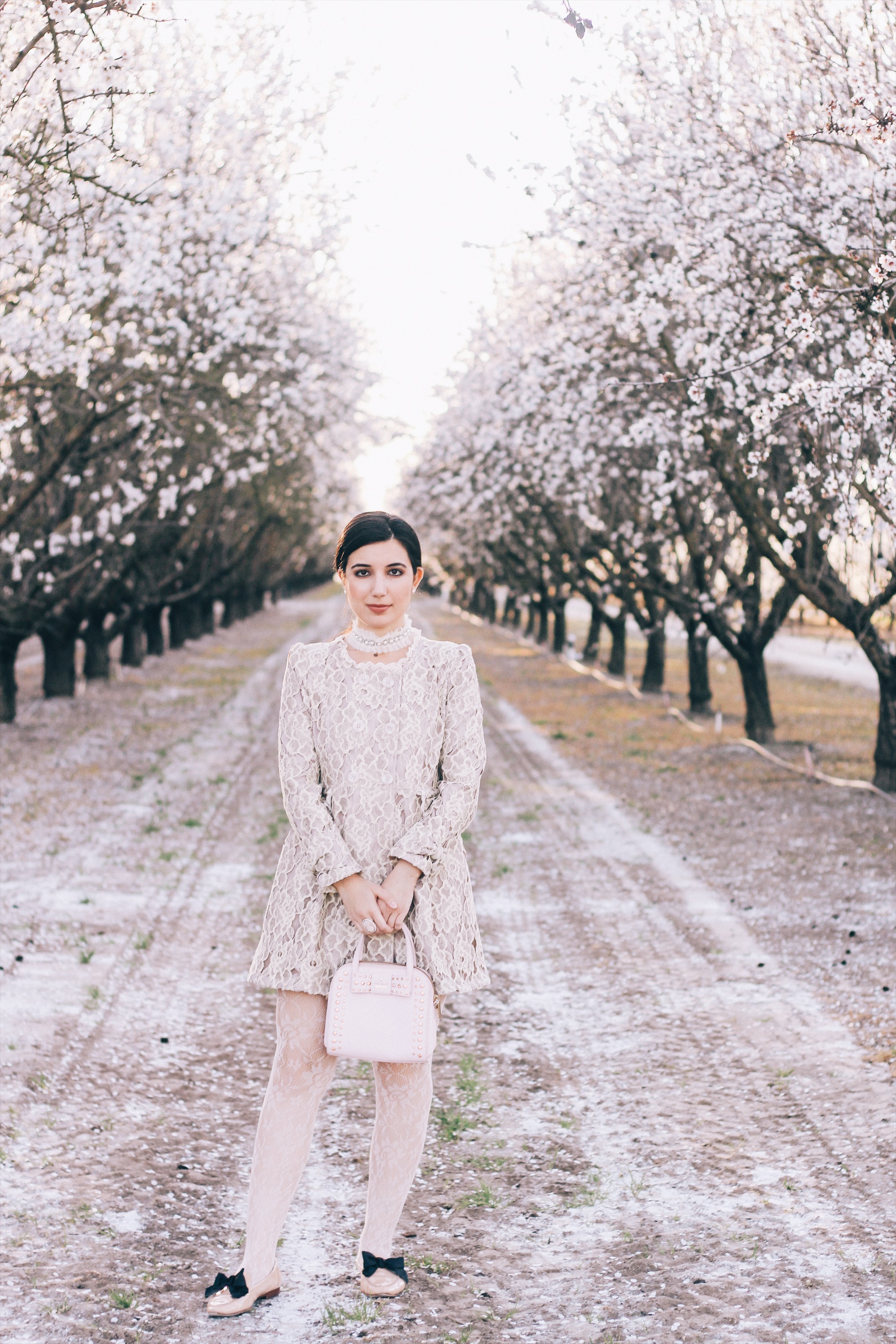 Well, just like the runway, my look is a somewhat updated and a less drastic version of this time period. Considering the fact that getting out of my car with toppings on my head befitting of a birthday cake would not boad well with the masses, I opted for a sleek lower pony tail instead. In addition to cake topping ‘dos women of the time caked their faces in frosting-colored powders– another thing I would not emulate in this day in age. Rather, I went for berry toned eyeshadow, thin eyeliner to make my eyes pop and a warm berry lip.

My wardrobe was also slightly muted in caparison to the salon styles of 18th century french fashion. I actually found this pinkish lavender jacket with cream lace overlay on a treasure hunt in Camden Market in London. When scouring the little clothing stalls throughout the ultra eclectic market, I fell in love with the Victorian-Rococo hybrid coat, with its double-breasted buttons, bow sleeves and pockets—not to mention the gorgeous bell shape of the bottom and sleeves. I highly suggest vintage shopping to find pieces like this, but have included some online options for you via my LIKEtoKNOW.IT account (same goes for the rest of the outfit!).

To complement the rosy lace of my outerwear, I opted for tights in a similar fashion—and let me tell you, I did not plan for the pattern be so identical to the jacket, but they both turned out to be lace of the same flower! For those final touches, reminiscent of a 18th century monarch (whether French or English) I wore statement jewelry: a pink cameo ring gifted by a cousin of mine, pearl earrings and a truly Elizabethan collar from ASOS. I say this without any sponsorship whatsoever: ASOS is one of the best online stores for anything from formal dresses to uniquely fun accessories—you won’t be disappointed! Plus students get a discount? Yes please!

Last but certainly not least, I opted for powder pink loafers that either Marie Antoinette or Louis XVI probably wore to be honest (I actually had the opportunity to see some monarchical shoes up close at the “Shoes: Pleasure and Pain” Exhibit at the Victoria and Albert Museum two years ago!). The black bow on these kate spade ones are probably less decaled as some worn by the French monarchy, which is a better option for daily wear. To match, I’m carrying my pink handbag of the same bubblegum hue with pink rhinestones and a pink bow.

With just a few simple things found in your closet and some treasures that shopped items not at the couture price tag—which is practically priceless since most pieces are one of a kind—you can achieve couture in your own style!

Shop My Looks on LIKE.to.KNOW.it Just screenshot or like my outfit photos on Instagram shop the product details from the LIKEtoKNOW.it app on the App Store! http://liketk.it/2uFMR