I stepped in the Petersen Automotive Museum opening night for LA Fashion Week in a pair of floral, open-toed Steve Madden heels. My strut from the red carpet to cocktail hour was just as purposeful as I was sure the models onstage would be during the Noe Bernacelli Haute Couture show later in the night.

In the midst of a bass-heavy track booming through the rooftop space and the endless chatter of LAFW guests, a distinctive voice called to me (cue “a voice which calls to me and speaks my name” from the Phantom of the Opera). 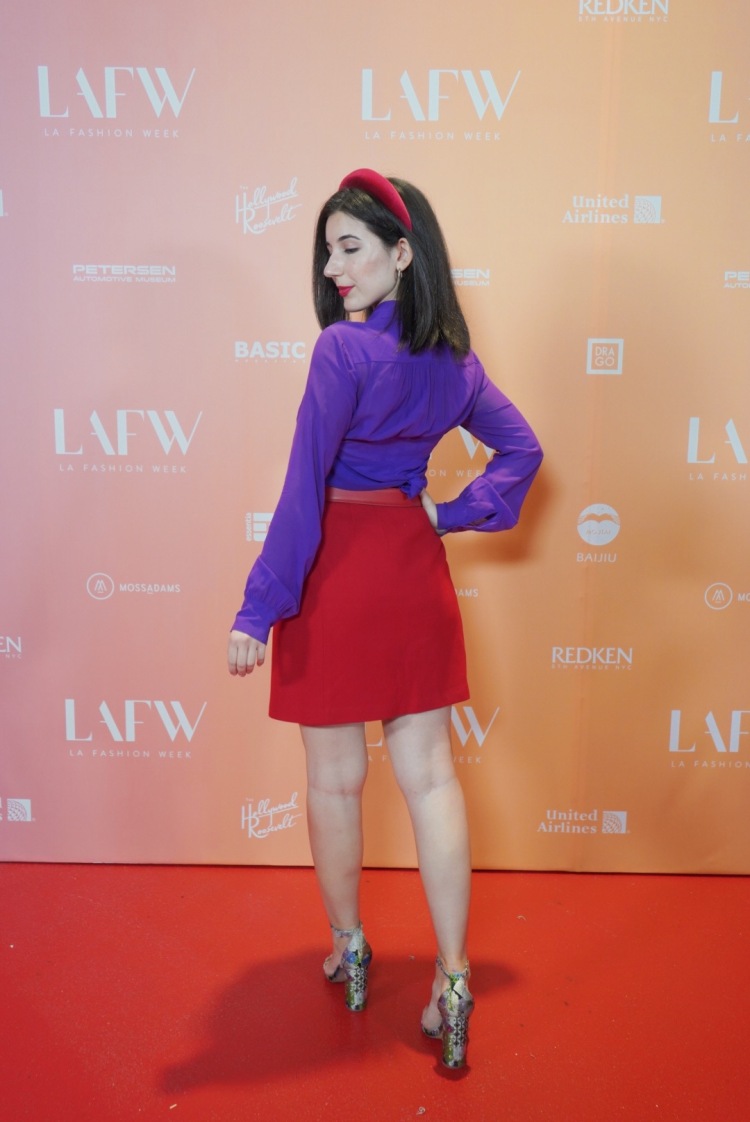 The voice belonged to none other than world-renowned artist and muralist, Robert Vargas, whom I became acquainted with through mutual friend, Mari Makatsaria at a private gathering at the Huntington Library Gardens a few months back. The event in the midst of the lush sculpture gardens of the historic museum was held in honor of Vargas’ modern rendition of the Blue Boy painting, which could be viewed alongside the original in the rococo-decorated art rooms.

When I had initially met Vargas, he was speckled in multi-colored paint, kneeling over a half-finished canvas. He barely looked up from the work, save to lock eyes with his subject. I glanced at Mari in complete awe of the brief intimacy of that relationship, artist and muse. This was something she knew quite well, as Vargas painted her at LA Fashion Week last fall. As an audience member, I felt like I was imposing on something transcendental. I was not alone, but amongst the crowd that swarmed Vargas during the live painting. Never did I imagine that I would be asked to sit for the artist whose work I had come to deeply admire. 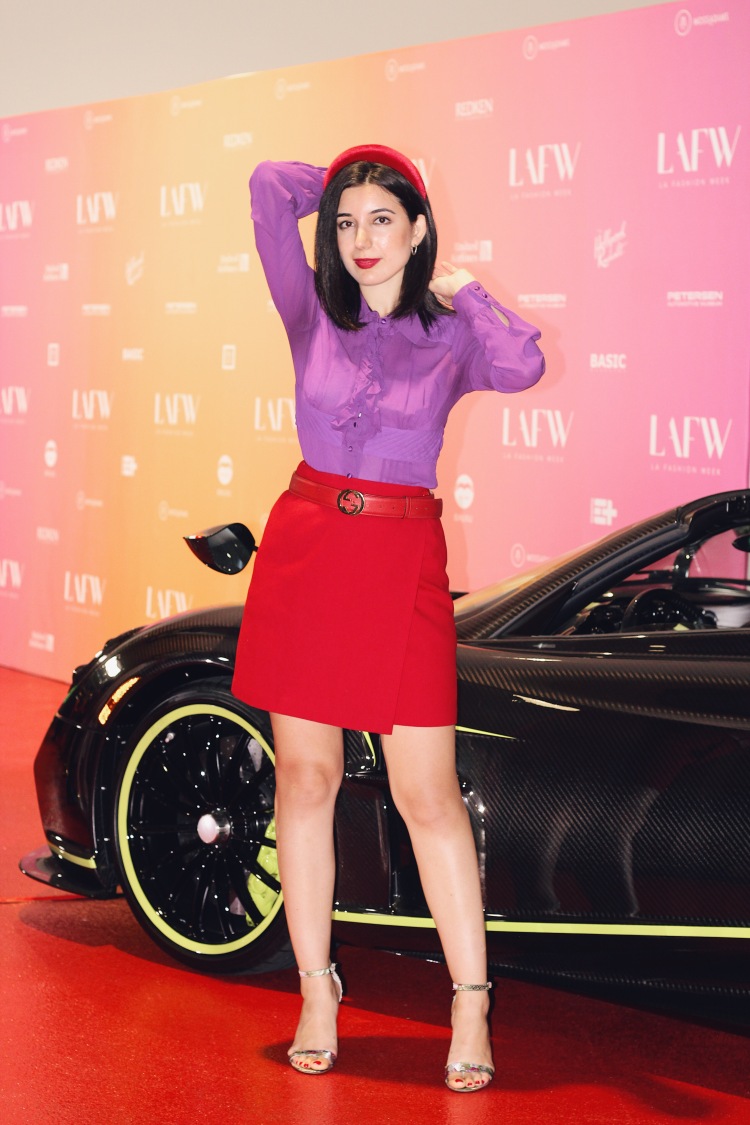 That changed when Vargas embraced me like a long-lost friend at LAFW SS20. He then began to study me with a critical eye. I supposed my entire look that night was visual stimulus overload. I dawned a royal purple chiffon shirt that echoed the Edwardian period with its ruffles and buttons, which I paired with a bright red pencil skirt made of wool. The color-blocked pieces I brought together with a cherry-colored Gucci belt and an architectural headband of the same shade. It was so voluminous in fact that it resembled a halo.

Vargas grinned at me and said, “You must sit for me tonight. I would love to open my live painting with you.”

I immediately blushed, thinking back to the evening I met him. It would be pretense to say that I had not entertained the idea. In fact, I had hoped for it and faintly remembered him saying in passing that ‘maybe next time I could paint you.’ I obliged and joked that it was fitting that he chose to paint me tonight of all nights, as I looked like a modern Madonna with my halo headband.

“Well, I suppose I am Leonardo Da Vinci then,” he mused. 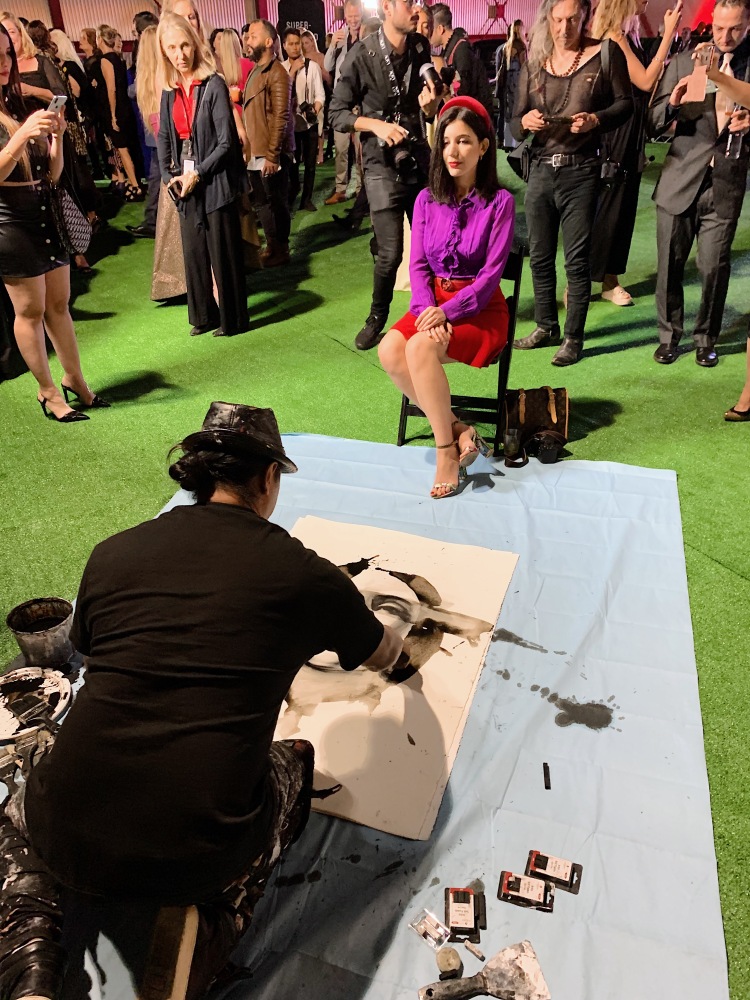 The LAFW team had set up significant space for Vargas’ craft. I took a seat on a chair in front of him, and immediately a crowd drew to us like moths to a flame. I met their stares, slightly unnerved that so many eyes were watching along with all the iPhone cameras pointing at us. Clearly, this was not something Mona Lisa had to endure during the Renaissance, but how could I expect any less?

“Be sure to stay still, don’t look at the painting or the crowd. Keep your eyes on me the entire time,” he kindly instructed.” I smiled and nodded.

And then the trance began. Standing still and keeping my gaze locked on only Vargas was an otherworldly experience. The crowd blurred around me as did the paint being splattered to-and-fro. In those moments it was only the two of us. Artist and muse. There was nothing quite like it, the intensity and vulnerability of allowing someone to create your likeness. Because the last person to do so was my creator. I was silently thankful that we had a friendship already, a pre-established trust between us. 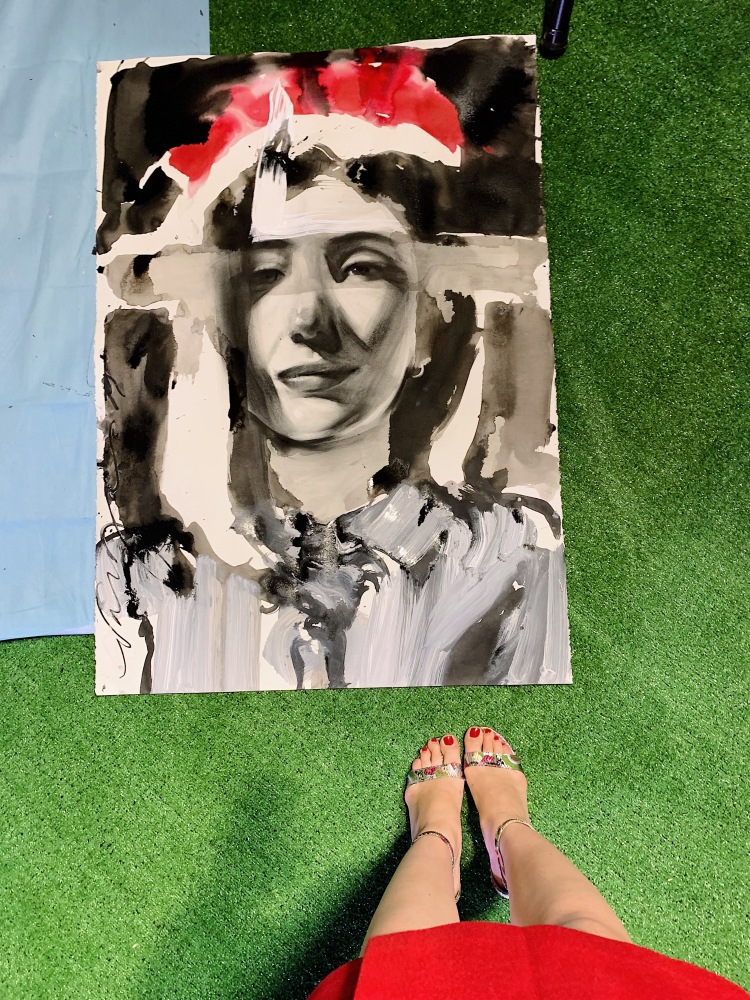 And then like a flick of the wrist, it was over. Vargas rotated the canvas to reveal my face fashioned in shadows and angles. An uncontrollable smile spread across my face, because it made me feel special. I voiced as much to him and gave him a hug in thanks.

“That’s why I do this. I want my subjects to know how special and beautiful they are.” Well, he was successful in both aspirations.

Many have asked me if I kept the painting, which I could not do any more than Mona Lisa could keep her portrait. Is it a shame? Perhaps, but I revel in the fact that I am now a part of Vargas’ art gallery and one day who knows? My painting may be a part of some person’s treasured collection or a museum someday. What a legacy.

I understand that I can never understand, but I stand. I see you. I hear you. I’m listening. #blackouttuesday #blackoutday2020
A dress meant for the ‘limelight’ 💚 Thanks to all who tuned in for @keepingitkrischic talk show’s first INSTAGRAM LIVE with @brandilaren of @destinationfab yesterday! Check my story highlight for the full recap. We chatted about asymptomatic Coronavirus, antibody tests, and how to pivot your lifestyle brand during a pandemic! I love the casual energy of a live versus a pre-taped show, which is why I’m planning on doing more! I’ll have another live next week for you all, so stay tuned for info soon!
Have you heard that phrase that the sky is God’s canvas? 🎨 I couldn’t help but think that as the colors turned as rich and deep as the pashmina tied around my waist, at a beach in Aqaba Jordan four years ago. 🌅 . . . A couple weeks ago, my mother urged me to come out to the backyard and behold a sky bathed in sunset, clouds fluffy and pink like cotton candy. “I’ve been inside staring at a screen for so long that the sky looks fake,” I commented with a laugh coated in both humor and sadness. ☁️ . . . The art gallery that is the outdoors is what I probably have missed most during these months of staying home. Stepping outside with the barrier of a mask isn’t easy, but it’s the promise that safety will bring days like this once again. Happy Memorial Day everyone. Please stay safe! 😷 . . . ON A HAPPIER NOTE: ❤️👙 ASOS is having a HUGE sale right now on these swimsuits. Shop your screenshot of this pic with the LIKEtoKNOW.it shopping app @liketoknow.it http://liketk.it/2PyPN #liketkit #LTKsalealert
HOW TO START YOUR OWN TALK SHOW AT HOME (Swipe for the TikTok video version of these instructions): 📺 - Create a logo and memorable name for your talk show, and print it on cue cards for your interview questions. (I got mine from @vistaprint) ✅ - Sit on your favorite couch in your home, and cast your logo on a TV behind it. This automatically gives a studio feel, even if you’re in your living room like I am! 🛋 - Find random props around your home that represent you! My brand is chic and timeless, so I used some antique books with gold-rimmed pages from my personal collection, a candle, and mug I printed with my logo. 📚 - Conduct your interviews through @zoom_video_communications to continue social distancing during this time. 💻 - Wear cute outfits that fit your personal style! A polished look aesthetically gives the impression of professionalism. However, don’t wear what you think is the “typical talk show outfit.” If you dress like you, that will instantly set yourself apart from other brands. As you know, my style and life mantra is “forward thinker with a vintage soul,” which translates clothing-wise to retro meets modern. 👗 - Last piece of advice: Have fun and trust yourself. Go into every taping session with the mindset that while this is your talk show, it’s not about you. It’s your opportunity to be a vessel for voices you believe need to be heard. Thank you everyone for your continued support! . . . Song on TikTok video: Ribs by Lorde . . . #keepingitkrischic #talkshow #krischicapproved #wfhstyle #wfhlife #wfh #wiwtoday #quarantellingstories #womenonair #newsgirl #expressyou #entrepreneurlife #womeninentertainment
When you run out of corners of your home to take photos in, so you end up hanging a bedsheet in your backyard! 🤗 . . . Speaking of gardens, this sunflower dress by @majorelle_collection is on sale!!! 🌻 Shop your screenshot of this pic with the LIKEtoKNOW.it shopping app http://liketk.it/2P422 #liketkit #ltkspring #ltksalealert @liketoknow.it . . . Song: Pose by Yo Gotti on TikTok
Coffee is a writer’s fuel (at-home iced coffee tutorial on the next slide via my TikTok). ✏️ . . . Not having the luxury of sitting in a coffee shop and watching the passerby window-side in between sips of a good cup o’ joe is definitely something I miss and took for granted before quarantine. ☕️ . . . My silver tongue has yearned for the notes of espresso that held within them stories of the regions their beans came from. A wordsmith’s skills are sharpened through multi-sensory experience of taste (coffee or tea), ambience (a cute workspace like a coffee shop) and sounds (music or people chatting in the background). . . . To bring a few of those elements into my own home, I decided to experiment with my @nespresso machine and make myself iced coffee as the coffee shops do, with my own spin! No exaggeration, this is the most delicious and chicest iced coffee you can make at home to accompany you on the porch while writing during the upcoming warm summer days! Follow me on TikTok for more fun content like this! Share a video or photo of yourself making my recipe, and I’ll repost on my stories 😉 #krischiccafe #krischicapproved . . . PC: @marimakatsaria TikTok Song Cred: ily (I love you baby) by Surf Mesa
%d bloggers like this: