Steadfast Krischic readers will know that I devotedly deck in the luxe fabric during this time of year (2017, 2018 and 2018 again!), but only recently did I discover the silk thread’s seductive powers on me. The key is in the connotation: during the Renaissance period specifically, wearing velvet was an nonverbal indicator of power and taste, according to The Met Museum. 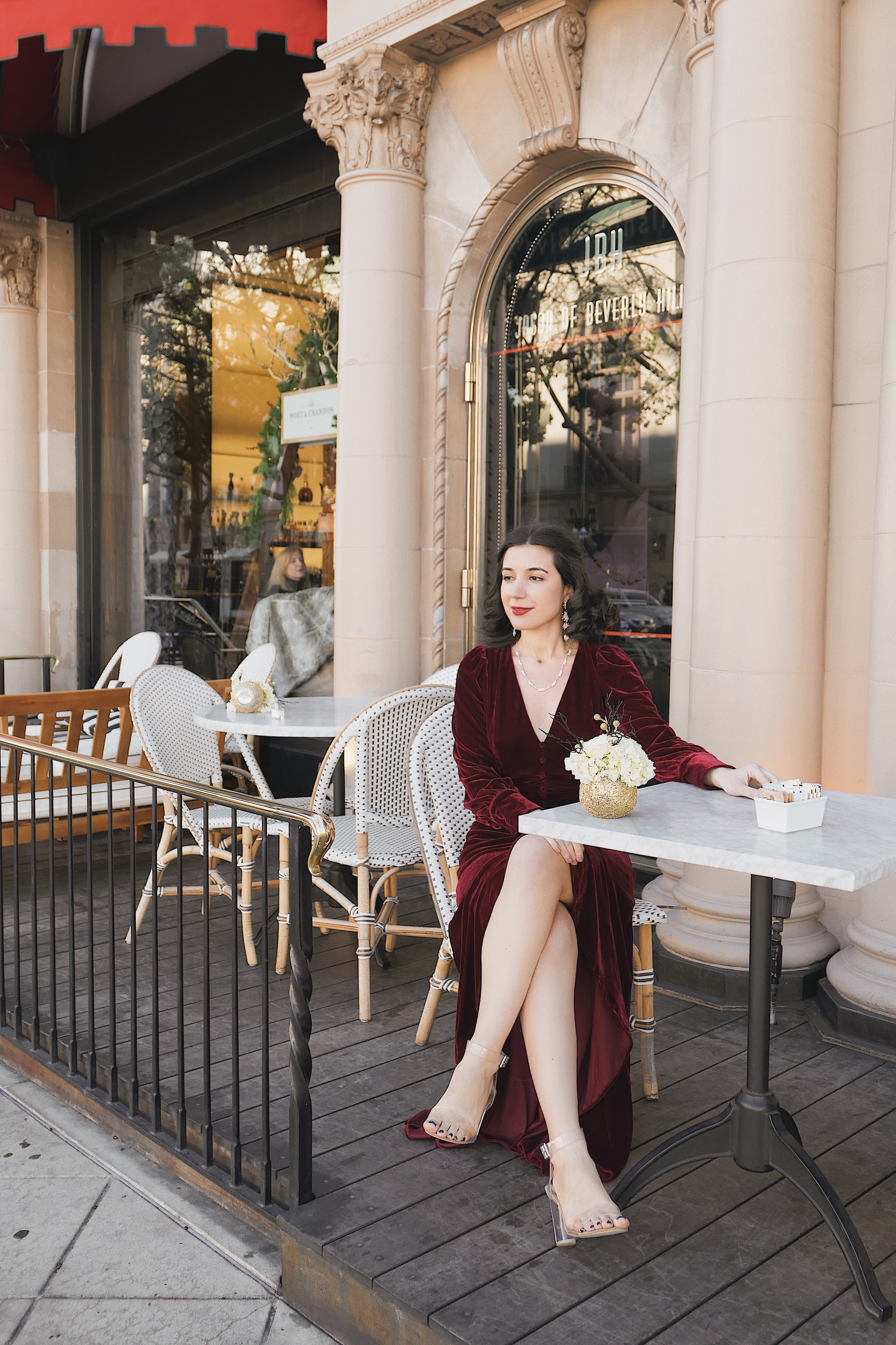 Before the Industrial Revolution’s invention of mass production, the commissioning of velvet was such an intricate process that the fabric was reserved for royalty, nobility and the clergy. Velvet is the result of piles of silk thread woven and looped over rods, according to The Met Museum. You can imagine the care and craftsmanship that went into productions of this garment when it first surfaced in 13th century China and made its way west along the Silk Road. The rich allure of velvet vestments became so valued in Italy (where a whole silk industry surfaced with France and England to follow) and England that Queen Elizabeth even listed in her 1597 Proclamation that “no one under the degree of knight was allowed silk ‘netherstocks’ (long stockings) or velvet outer garments,” according to the British Library. 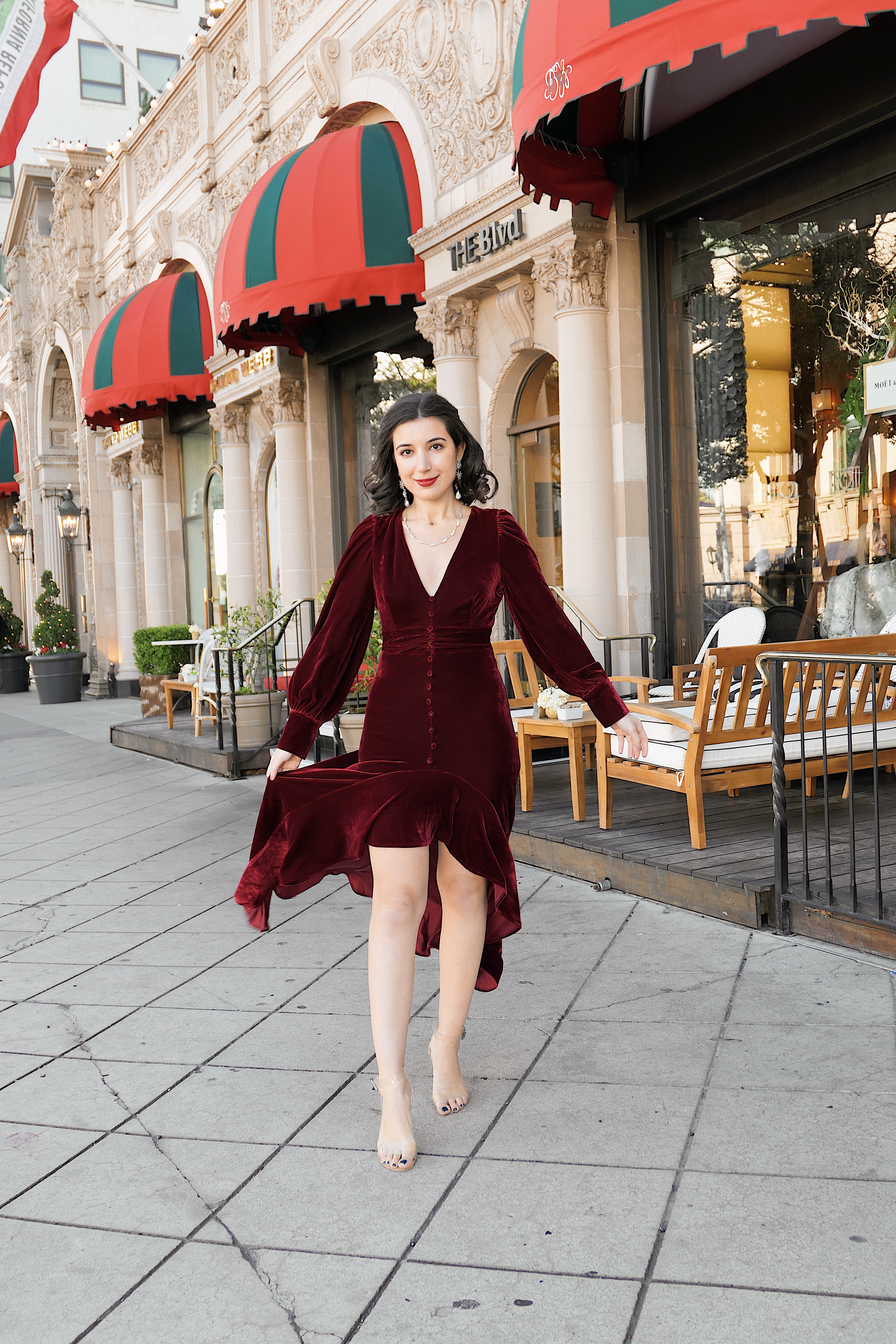 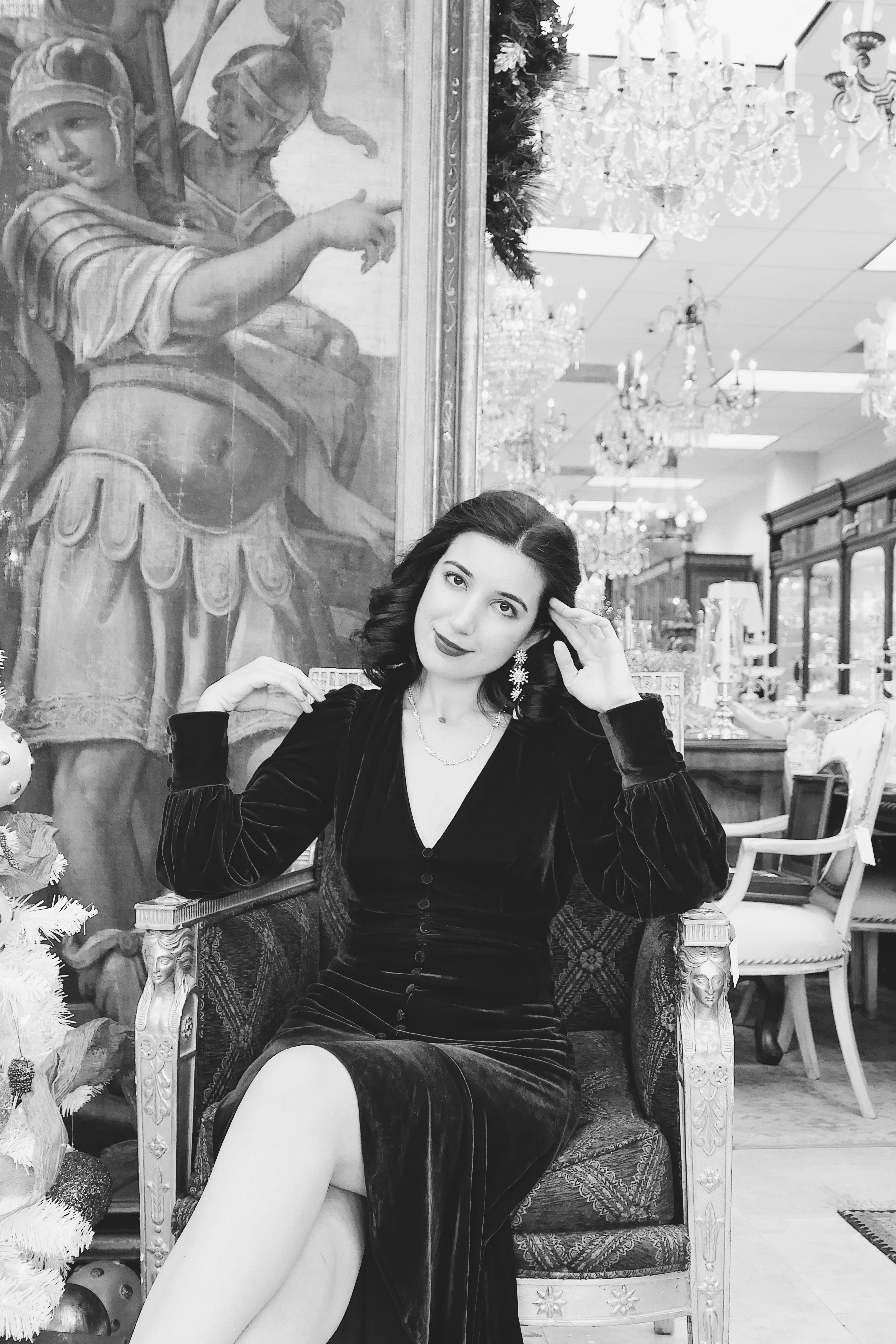 Velvet is such a sumptuous, head-turning textile with a history equally as rich that I cannot help but emulate its vitality when I wear it. This velvet vestment in particular that Nanamacs sent me drew me in with its pomegranate hue and Edwardian silhouette. I die for these early 20th century elements like leavened sleeves that cuff at the wrist and buttons crafted from the same velvet as the garment. Simultaneously the 21st century updates like a low-v neckline that accentuates the décolletage, the high-low hem that flirts with the wind and a back cut-out make the dress sexier in a chic way.

When I wear this gown, I feel like an aristocratic protagonist in a period drama Christmas special. The persona only deepens as my rhinestone snowflake earrings and matching necklace to glisten in the Beverly Hills sunshine. My “co-star,” Mari Makatsaria and I (who is as luxuriously clad) hit the historical Christmas special jackpot when the Uniquities Consignment House invited us to peruse their treasures and take photos along the way. It’s as if we are transported amongst the inanimate company that velvet wearers throughout history once kept. A full circle moment. 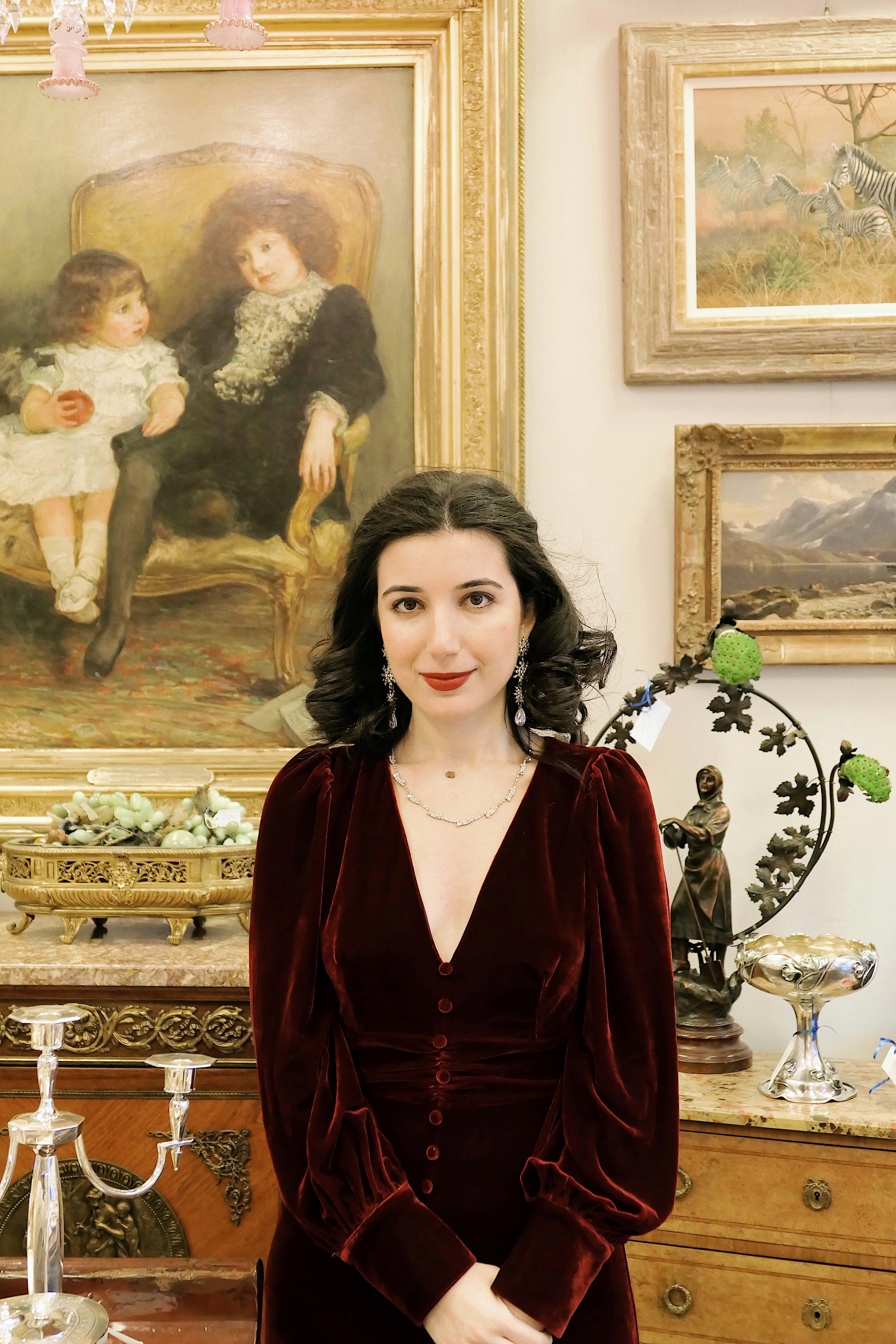 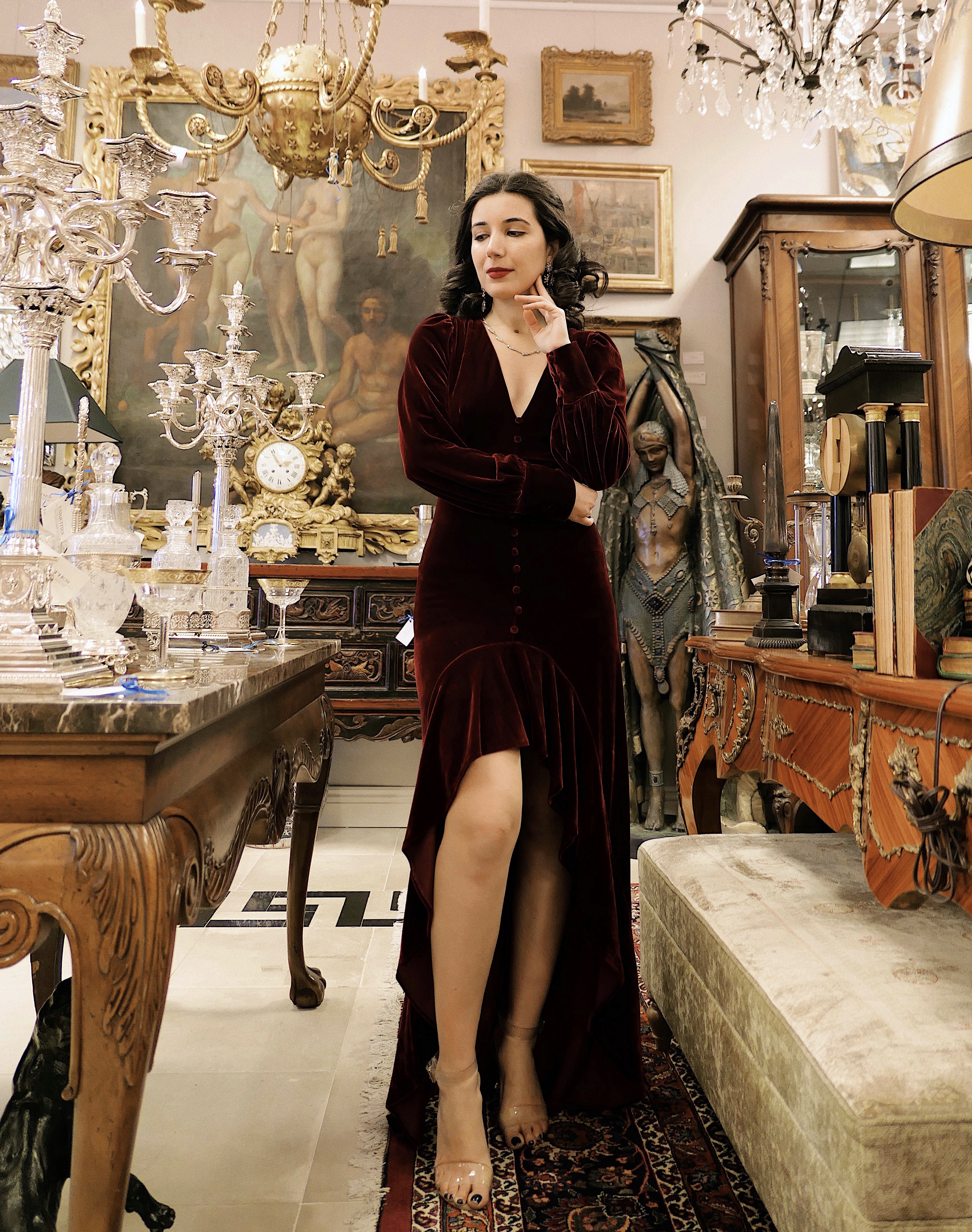 What will you be wearing during the holidays? Let me know in the comments below!

Like Loading…
← Manet and the Fashion Girl on the Move
→ That was So Last Decade: My Style Evolution