This guide was a long time coming, and I’m sorry I drew it out longer than the War of the Roses!

Dedicated readers know all too well that I’m an anglophile, something I haven’t been able to shake since living in London for an entire year (granted I had an obsession with all things British long before then!). Living in LA for the past few years while longing to be back across the pond, I am tirelessly on a quest to quench my U.K. nostalgia, from the food, to the scenery, to the literature.

If you too have the London calling, here are the places in (and around LA) that have become my British havens.

You are not a true Londoner if you don’t grab a pint after work with your friends or enjoy a Sunday Roast at the pub. Ye Olde King’s Head is honestly a three-in-one British stop, because it has the pub complete with English delicacies like Shepherd’s Pie, Bangers and Mash and Fish and Chips. The Santa Monica destination has a gorgeous scarlet salon for afternoon tea and a British imports store that has English goodies I miss dearly like Jaffa Cakes, Hobnobs and clotted cream! The head nods to the queen, the portrait of Winston Churchill by the fire and the British accents floating in the air (most of the people that work there are from various parts of the U.K.) will have you feeling like you’re back in Britain without the 10-hour flight.

Almost identical to its London namesake, the Burlington Arcade in Pasadena is one of SoCal’s best kept secrets. Stepping through the walkway you’ll find concept stores, salons, a suit tailor outpost and crimson phone booths! I highly recommend grabbing an iced latte from Float and enjoying it while sitting on a window seat overlooking the arcade. 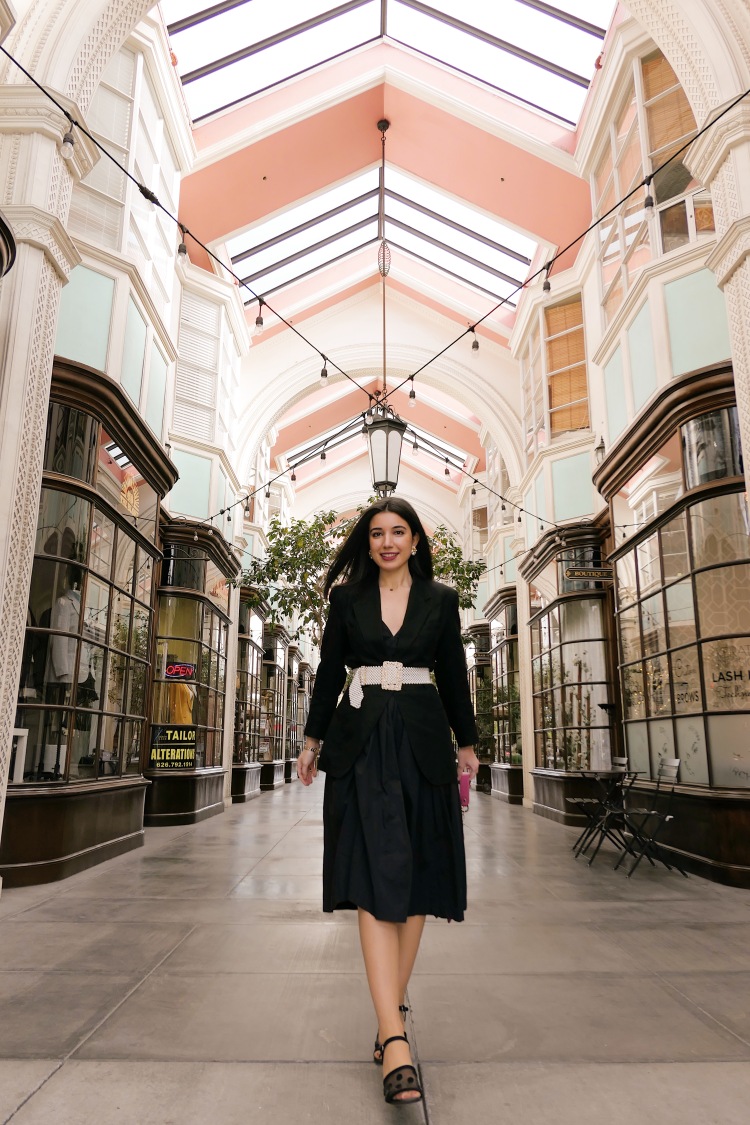 3. The Huntington Library and Botanical Gardens

Located not too far from LA in serene San Marino rests the estate turned museum, The Huntington Library. With masterpieces from all over the world, you can be transported anywhere internationally, but there are of course enough English motifs for the anglophile’s senses. The museum’s vast manuscript collection makes me reminisce over rare collections from the British Library in London. The afternoon tearoom overlooks a colorful rose garden with delightful fragrances of citrus and rose. And the European art rooms with 18th century tapestries, rococo wallpaper and British portraits are like those of London’s Wallace Collection.

Floral crockery to match rose arrangements and flora and fauna drapery will have you feeling like you’re taking refuge in a cottage along the English countryside. But rather than rolling hills, you’re in Beverly Hills and maybe you wouldn’t get complimentary champagne in a cottage.

This evening venue is also on my “bookish things to do in LA” guide, but I felt the need to share here to because it just oozes England. From a bust of Shakespeare flanked by a literature-filled bookshelf to a cocktail menu with bookish references like “The Lion the Whiskey and the Wardrobe” and “Phantom of the Aperol,” you’re sure to feel that British buzz. 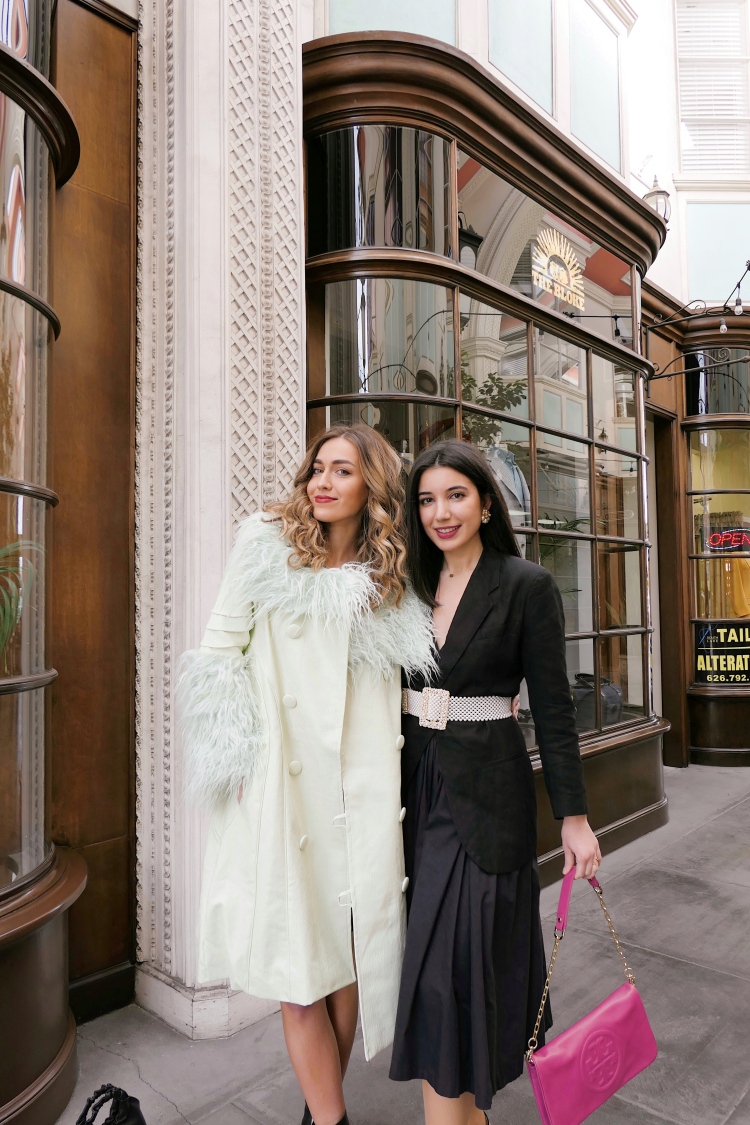 Another English-evoking pub, specifically a head-nod to Cornwall. I fell in love with this watering hole upon first sight of its all-black exterior decorated with hanging flower plants because it prompted Churchill Arms nostalgia. Pubs like this are gems, way superior (and classier) than bars if you ask me. This one located on Pico is coated in green Tartan wallpaper, a pastoral wall mural and Union Jack Flag. Plus, The Stalking Horse horse has some of the best hard ciders on tap in SoCal to go with a delicious plate of Fish n’ Chips.

All photos were taken at Burlington Arcade and The Huntington Library by Mari Makatsaria.

Last night I went to bed after reading over 50 pages of @cassieclare1’s #thelasthours in one sitting, and now I’m almost done with it. 📖 . . . My mind has become a welcome home for a fantastical realm that only books can provide once more. Because I’ve finally been able to stop being restless and be still (don’t get me wrong, I’m still being productive but choosing not to do so to the point of being unhealthy). 😌 . . . I will leave you with this quote, from another book that has imprinted on me during these uncertain times (courtesy of yesterday’s virtual bible study with my @vintagechurchla women’s group): ““The Lord will fight for you; you need only to be still.”” ‭‭-Exodus‬ ‭14:14‬ ‭NIV‬‬ 🙏
Some of my most unique and timeless pieces come from my mother’s collection of ‘80s and ‘90s wear that she kindly gifted me. 👗 “I love your outfit! Where did you get that?” A friend will ask when I am sporting a retro piece. “A little boutique called “Mama’s Closet!” I reply, wittingly. 😏 Friend: “Sounds like a neat store! Where is it?” Me: “No, I literally mean my mamma’s closet!” Fun fact, my grandma actually made this jumpsuit for her, and now it’s passed down, generation to generation! -My video via @tiktok
A #stayathome message from me or @beyonce, idk 💁🏻‍♀️🎶 . . . Here are some myth busters on Coronavirus straight from @who: -People can be infected at any age, although older people or people with pre-existing medical conditions are more vulnerable and can experience worse conditions - cold weather cannot kill Coronavirus and can still be passed on from person to person in hot climates - antibiotics do not work against COVID19 or viruses in general, only bacteria -while sanitizer is good to have on hand, it’s better to wash your hands, especially for 20 seconds (between fingers, under fingernails and palms) -refer to WHO and @cdcgov for most updated and accurate info on virus . . . . . . . . . #flattenthecurve #stopthespread #coronavirus #covid19 #alonetogether #tiktok
My mother is like the gold-rimmed floral china we dressed the dining table with: beautiful, precious and rare. She has the ability to make food into works of art: case in point, the finger sandwiches in our afternoon tea spread (link in my bio for full menu) ☕️ 🍰 . . . Shout out to the healthcare workers, grocery workers and factory workers. Personally I must pay tribute to two unsung heroes: my parents. My father is an executive in the healthcare field and goes into work every day. My mother has been keeping the house in order and all of us fed. My brief leave from LA is made better with a family like mine! ♥️
How to throw your own “quaran-tea” (blog post preview ahead): This Saturday’s descent down the family staircase felt like a passage out of an Elizabeth Gaskell novel meets Audrey Hepburn film. After all, I wore a Victorian-style off-the-shoulder dress trimmed in black lace, the low-scalloped neckline the right cut to show off my mother’s gold coin necklace. ✨ . . . I grinned ear to golden-ornamented ear with red-rosy lips and pulled back my hair in a low bun, Hepburn style. 💄👱‍♀️ With the exception of house slippers—one stay-at-home adornment I wouldn’t shirk in favor of my fancier threads, I had brought myself out of the pandemic-induced funk of the previous week, a fashionable phoenix rising from the ashes. . . . Despite all entertainment, fashion and sporting events dropping like flies from my calendar, I was dressed for a special occasion indeed—a DIY, afternoon tea at home during the COVID-19 pandemic. Head to keepingitkrischic.com (link in my bio) for how to throw your very own quaran-tea party (prepare all dishes with #safehands)! ☕️ #keepingitkrischic #stopthespread #socialdistancing #alonetogether #flattenthecurve
You can scare away the #sundayscaries with a smile! Just listen to Nat King Cole 🏰 ❤️ . . . This was one of the first weekends during #shelterinplace that I truly pushed past the funk of #socialdistancing. I had various FaceTime and Zoom chats with people in my life that I care about, played many board games with my family, threw an at-home tea party (blog post on that soon), and went for a walk (while keeping a safe distance from others of course). These small acts of normalcy made me feel like myself again. I hope you all had a blessed weekend and are staying strong during this time. Remember, even though we are distanced, we are not alone. God is faithful. We will get through this! PC: @marimakatsaria
%d bloggers like this: