Crossing the threshold of the jewelry district to the Spring Street Arcade building—a Spanish Renaissance hole in the wall built in 1924—I could truly say I found a diamond in the rough of Downtown Los Angeles.

I used to be a local downtowner from the financial district but rarely crossed over to the grungier side of the city unless in pursuit of a hidden gem. From the stained streets of Los Angeles, I felt transported to the romantic ones of Paris—as Garçons de Café’s  al fresco seating emulated the kind Ernest Hemingway may have frequented on trips to Paris in the 1920s.

Was I truly still in Los Angeles? I pondered, glancing down at the blue and cream checkered wicker chairs and then peaked through the cherry wood-framed windows to glance inside what co-owner, Sofian Ketfi described as a French apartment that people come to hang out in. The café and concept store features an exposed brick wall and dim Edison lights hanging from industrial ceilings. They light up the face of a Mona Lisa replica painting and bounce off the mirror of a Victorian-style dresser. While the interior is chic, it didn’t strike me as some stuffy wine and charcuterie affair for a fashionable elite—which by the way, the café concept store has in abundance—65 reds, 30 whites and 5 bubbly wines from a medley of wine regions in France.

“It’s a place that makes you comfortable, bringing the best wine we can for the best price, making sure everyone enjoys the bottles they would like to open,” Ketfi said about Garçons de Café.

The second you step inside of Garçons de Café, the three-hundred wine bottle-filled rack ornaments the wall behind the bar like a collier of topaz and onyx would rest on a person’s neck.

The owners will be there to pour the wines for you. Ketfi told me he lives just around the corner and is in every other day—serving and chatting with customers that he said become like friends.

“That’s the most beautiful thing about this place: the gathering of people that are coming from really different classes or areas that would never hang out together if there were no places like this.” 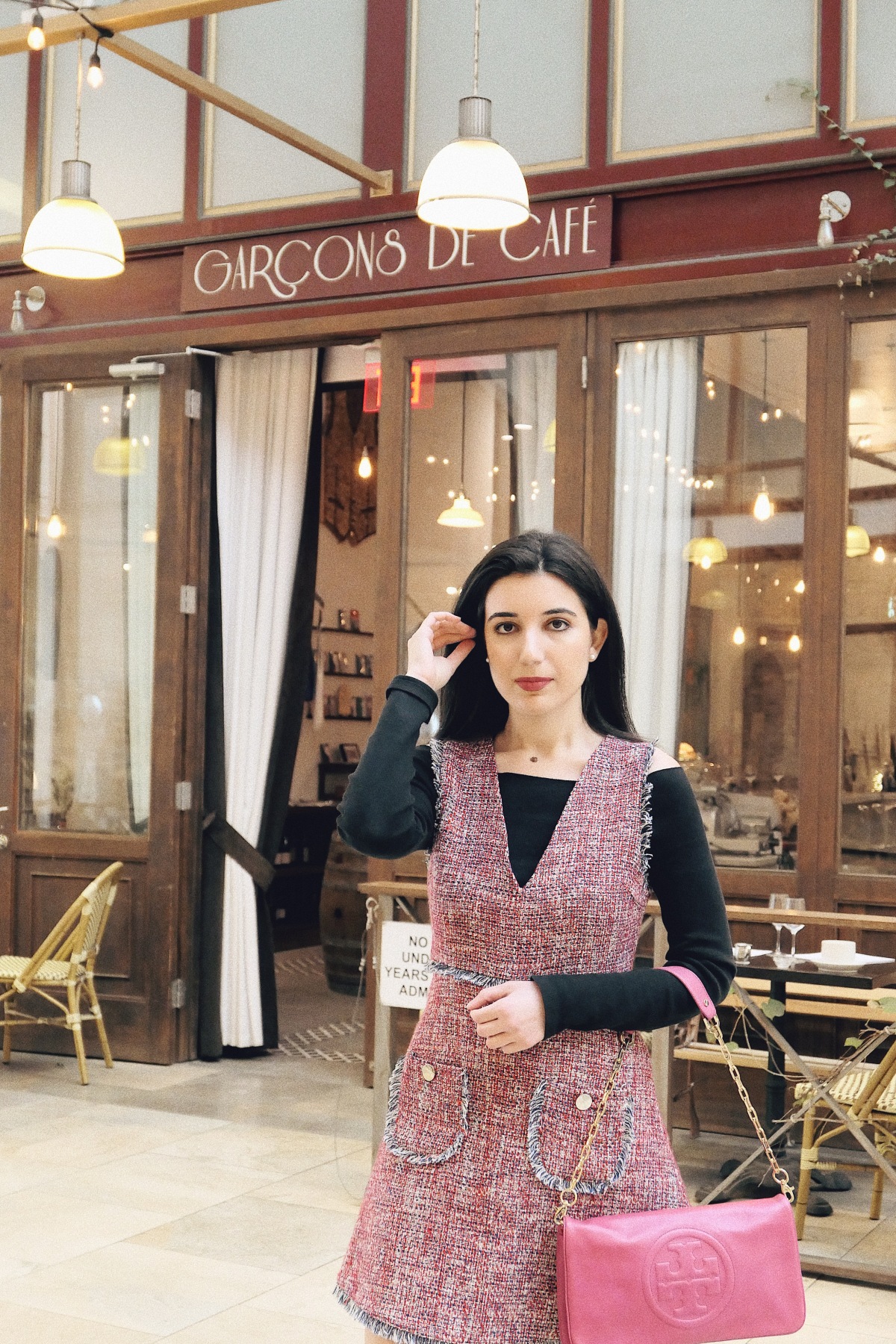 But wine, coffee and boutique-sized cuisine aren’t the bistro’s only offerings. Keeping up with the trendy apartment theme, the space contains racks of men and women’s clothing for sale from well-known in addition to up and coming French designers.

“It’s more like designers we know, or friends of designers—not all are friends, but some. All products are personal,” Ketfi said. “So we brought that for fun and present what we like.”

While some brands like Margaux Lonnberg are popular in New York, Ketfi said Garçons de Café is a link for French designers to an untouched market in Los Angeles.

“It’s hard for them to reach the people here,” Ketfi said. “I think maybe they have a different approach. That’s why we are here to make them able to put some stuff on the shelves.”

The apartment-style bistro has other artisan trinkets as well: leather journals, and piles of newspapers and magazines—French Vogue and GQ to name a few. They can be read on a cozy leather couch in the middle of the room, one of the upholstered chairs overlooking the arcade, or right at the bar, where you can chat with Ketfi and co-owner Thomas Choulad like some of the other visitors.

Upon my first visit to Garçons de Café, I took a seat at the bar and attempted to speak French to the co-owners and failed miserably at it. Poorly, I told Ketfi in his native tongue that I was a journalist.

“Je suis journaliste. J’aime ecris,” I stammered in between bites of sliced salami with bits of pistachio and prosciutto—which Ketfi mentioned was from a butcher from Portland.

“It’s hard to bring French charcuterie, but the guy trained for years in the streets of Paris. He has all this knowledge,” Ketfi said. “That’s one of the biggest producers because he respects the [French] tradition.” 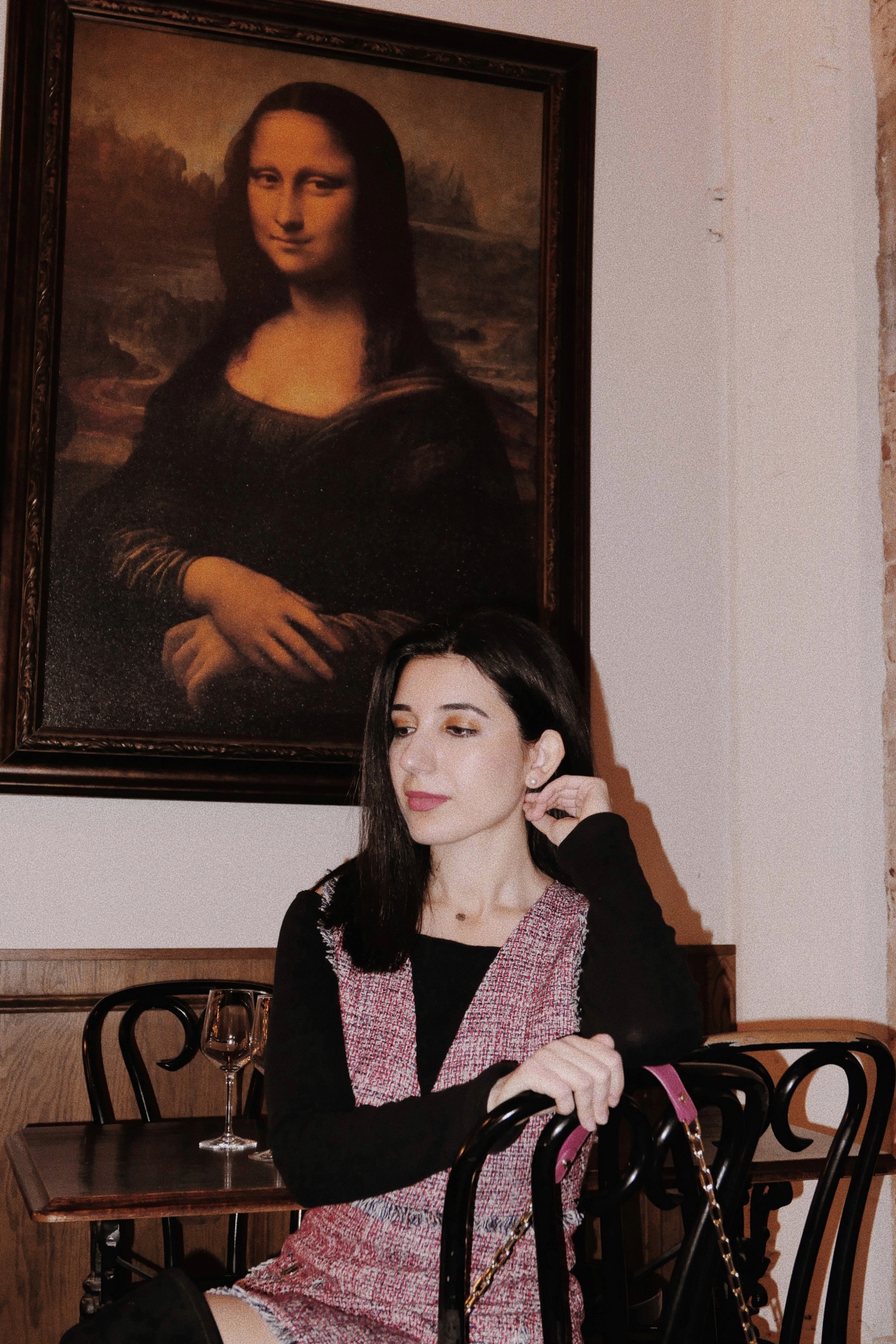 Clearly my less-than-conversational French did not drive Ketfi away when I asked to sit down with him and hear his story. To the melody of 1940s jazz (and at some points American hip-hop), I listened and scribbled.

Ketfi grew up in Tours, in the south of France with a French mother and Algerian father. His father was the chef in the house and cooked traditional French and Mediterranean dishes. Couscous was commonly on the family’s menu.

“[Being raised in a multiracial home] helped me keep an open mind, Ketfli said. “It keeps you open-minded to different cultures.”

It was growing up with these homemade foods and delicious wines that inspired Ketfi and his business partner, Choulot to open Garçons de Café.

“Always homemade French [cuisine]. I never ate at school,” Choulot chimed in between pouring glasses of wine for guests that flanked me at the bar.

Ketfi obtained two associate degrees in math and physics, then received his graduate degree in finance at the Management School of Paris. Eventually he went on to work in Africa.”

Africa was where Ketfi met his business partner, Thomas Choulot while working at a French construction company together. Ketfi was a financier, Choulot a construction engineer—two different talents that Ketfi said would lend themselves to opening up Garçons de Café in Downtown Los Angeles in 2016. 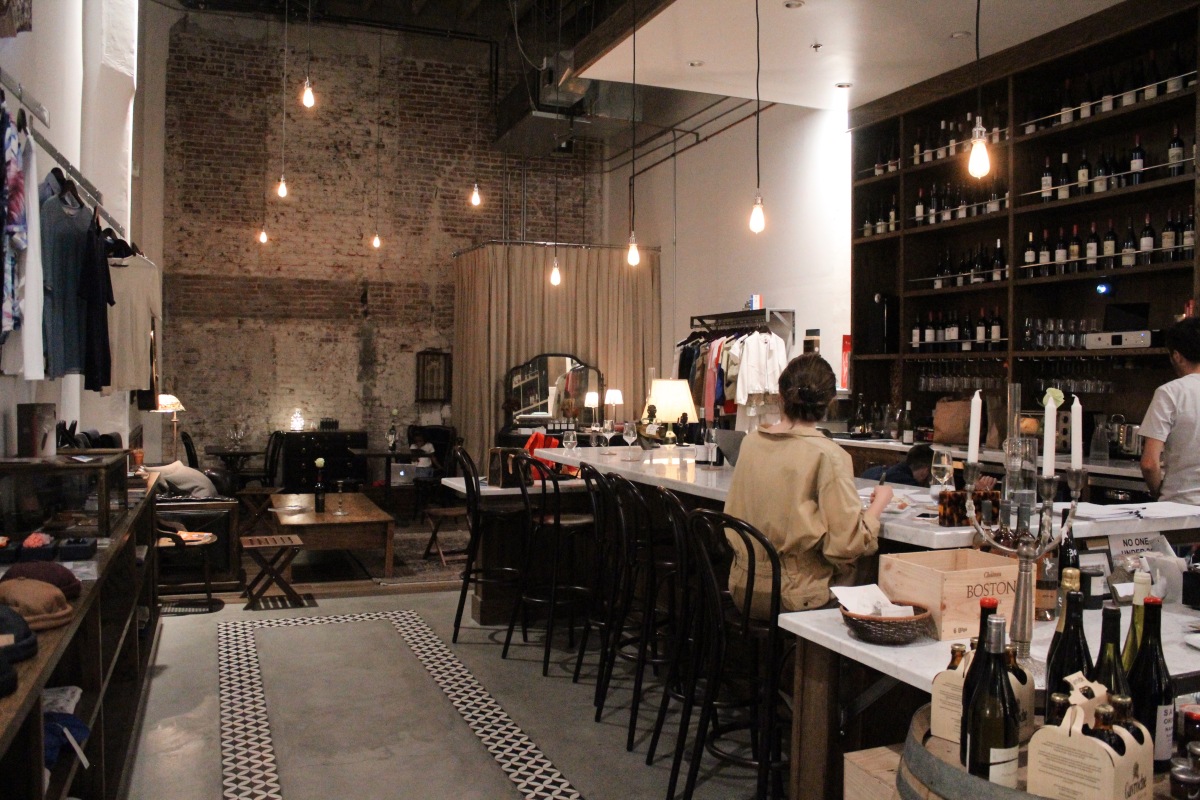 “We wanted to bring what we like somewhere else we see our lives—where we would feel comfortable,” Ketfi said.

This was right around the time of the Downtown Los Angeles renaissance, a major surge in production the area hadn’t seen since the 1920s according to The Los Angeles Times. How fitting since downtown’s facelift resurrected a French café that exhibits characteristics of The Jazz Age.

“Downtown is such a new place compared to four years ago, Ketfi said. “Being a part of the whole evolution has been fun.” 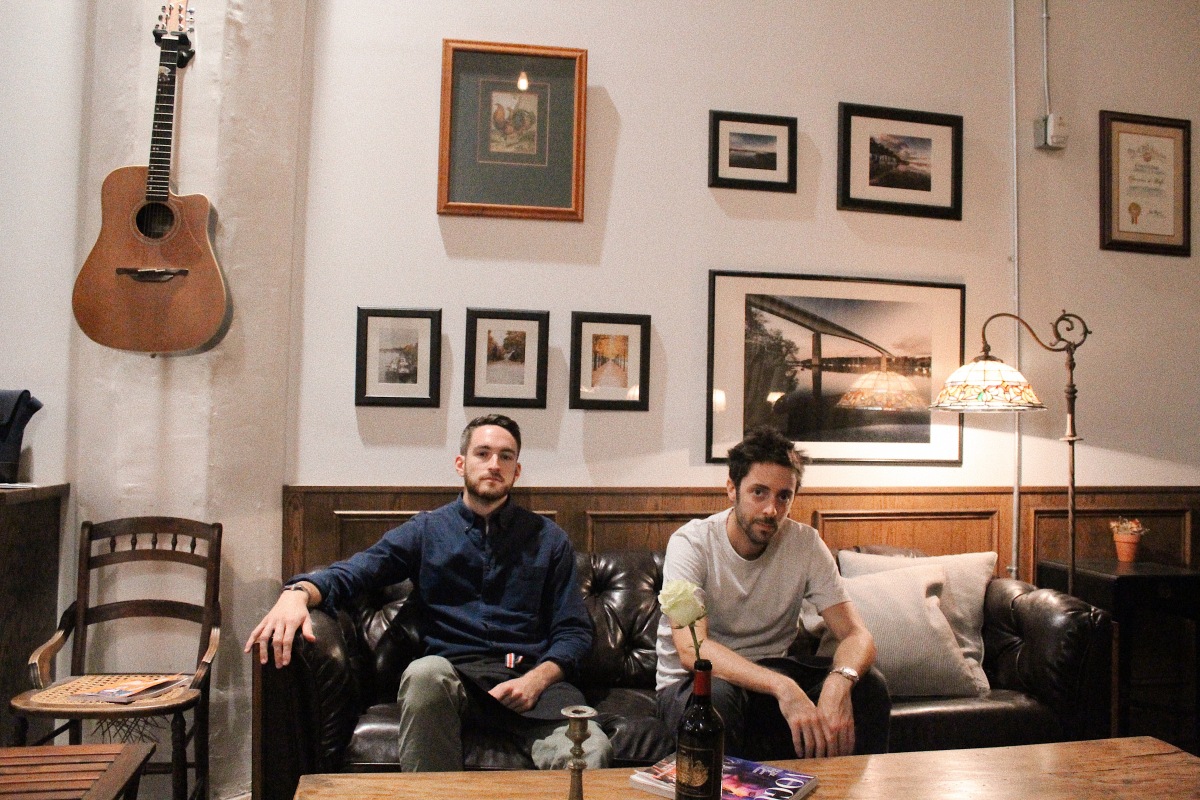 The owners of Garçons de Café seek to foster deeper community during this continued evolution of DTLA. The café hosts wine tastings and live music nights every other Thursday. I asked who the guitar belonged to that hung on the wall parallel to the bar. Choulot claimed ownership.

“Do you play it sometimes on live music nights?” I inquired.

“Not yet,” Ketfi smirked back at him.

Ketfi has his share of hobbies as well. When he is not running the café, he drinks wine with friends and takes photos with his DSLR camera as he did while in Africa and for a few clothing brands. He also rides motorcycles.

“It’s nice for getting through LA traffic, as we do the same in Paris,” he said.

“Do you ever miss home?” I asked Ketfi at his mention of Paris.

“I don’t really think about it,” he replied. “I am enjoying my time here, and I go back to France pretty often.”

But while Ketfi may not think about home too much, there is a beauty I find in the fact that he is surrounded by mementos of home. French wine and cuisine, yes but also a marble candle holder right at the bar counter next to him; it once belonged to his grandfather who he was very close to. 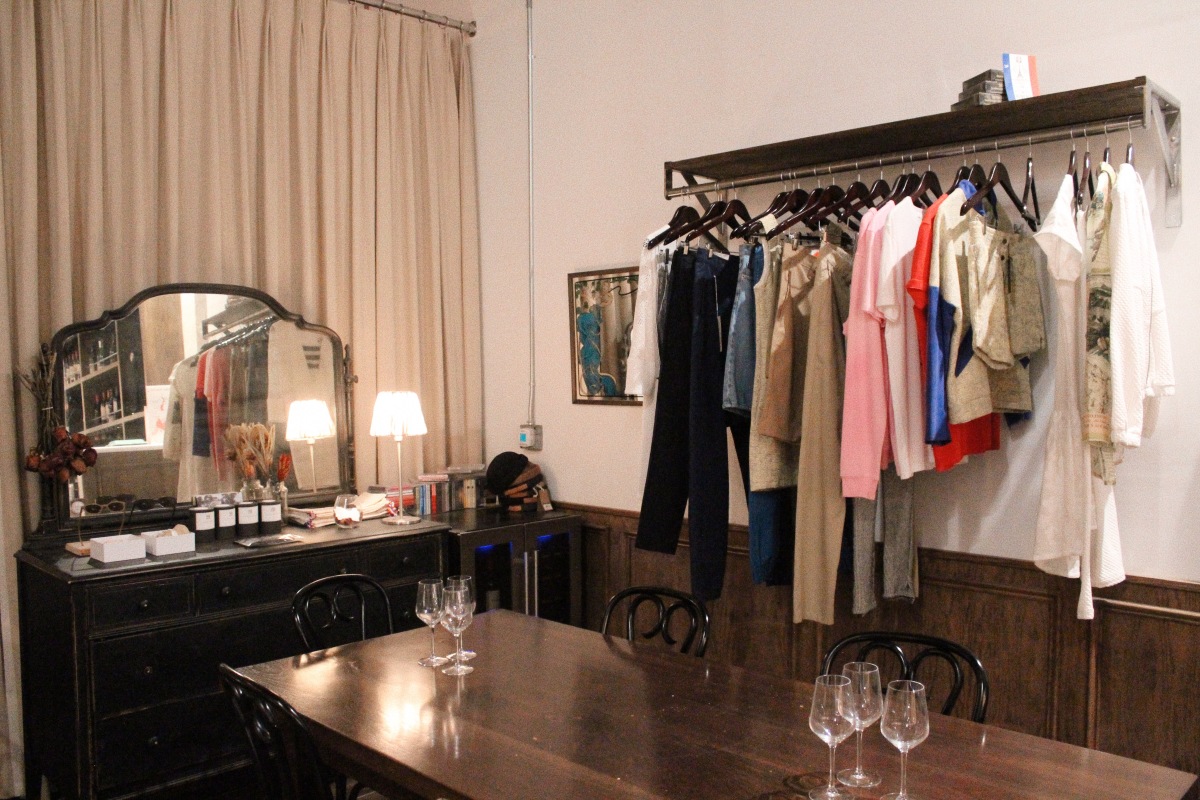 Published by Keeping it Krischic

Forward thinker with a Vintage Soul. Editor and traveller with a love affair with words and whimsical wardrobes. Follow me on my journey to amazing sights through the lens of personal style. View more posts